November proved to be one of the months I was most grateful for. I can’t think of a more worthwhile and gratifying way to spend a little bit of my own time than helping those that were affected by Hurricane Sandy.

Like thousands of others, I originally planned on volunteering at the ING NYC Marathon. Instead I headed out to Staten Island on Sunday, November 4th with a ferry full of runners and other folks looking to lend a helping hand. That day turned out to be more rewarding than I could have imagined. I was in awe of the number of people that were willing to go into a disaster zone without a second thought. 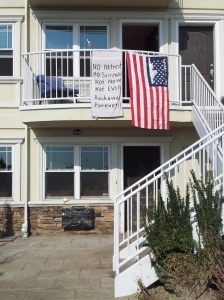 We didn’t come with a real plan. We didn’t want anything in return. We were simply strangers coming together to help strangers in need. I guess you could say the feeling was euphoric. I definitely wanted to share that feeling with others so for the two next weeks I went out to Far Rockaway in the same manner. Myself and the folks who joined me worked at the homes of complete strangers for as long as we could. At sunset we headed to the bus stop and waited with volunteers and locals to get off of the inlet. The commute back to the train was the low point. Even then we made the best of the 1.5 hour long bus ride, which should have only been twenty minutes.

The smiles and hugs were the only compensation that we accepted. As we lifted floor boards, ripped out drywall and pulled out waterlogged insulation we tried to make light of a

really tough situation. One owner joked with his wife that he didn’t want to get the floor dirty as we trudged though muck while clearing his basement. What many people fail to realize is that these were working class people who were simply living the ‘American Dream.’ For many they spent a pretty penny to move to their communities and in a matter of hours everything was turned upside down. Suddenly you are tapping into reserve funds to pay for water removal and electrical rewiring. This was the last thing on anyone’s mind since everyone was comparing this storm to Hurricane Irene, which did minimal damage to New York City.

Beyond the tears and feelings of doubt you could see the light coming back to those that lost almost everything. The people in the homes I went to were much stronger than they realized. I immediately thought of the lines: 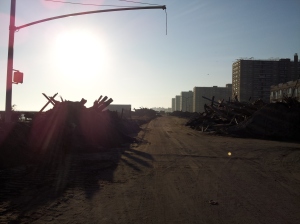 Through this place of wrath and tears looms but the horror of the shade
And yet the menace of the years finds and shall find me unafraid
–William Ernest Henley
You think about what you would do in a situation like this, but you never really know how you will react until you are living through this nightmare. I am grateful that I was fortunate enough to sustain no damage to my home, but I am even more grateful that I was able to provide an ounce of assistance to a few people in Staten Island and Far Rockaway during some of their darkest hours.