Those that know me would likely say that, “I am a bit of a free spirit and spontaneous.” I assume I proved them right when I decided to get married at Burning Man and then actually followed through by marrying someone I had never actually met until our wedding day. There are certainly folks that would say that is insane, but I think it was great that way. 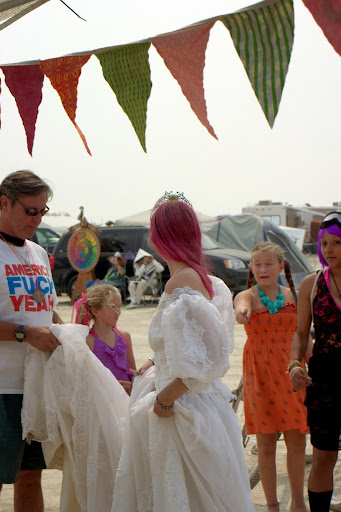 I asked potential platonic spouses to fill out an online form. Over a dozen people responded and a group of folks sat down with me at a bar to go through the responses, names/gender were redacted to make this unbiased. The group ended up selecting someone from NYC. A virgin burner who had kick ass responses to questions on the form. Date and time were set and we agreed to meet at Champagne Lounge (who graciously let us use their lounge space for the ceremony and short reception, down the road from my camp, for the ceremony.

After picking up a fun looking ring and sending Facebook wedding invites to camp mates I figured everything would work its way out. MagicMan would officiate, Dogbrain would walk me down the aisle, Ice Brain was to be my ring gal… It was set. For some odd reason I thought it would be a bright idea to run my first 50K the same day as my first wedding. The few hours between the race and wedding were not pretty. Could I really go through with this after putting my body through five hours of running? As we say at camp, “It’s probably fine.” So when Ice Brain ran over and said someone in a white dress walked by I knew I had to get ready for the big show.

We physically met for the first time just before we were to walk down the aisle. The music started and we were all systems go. It was great! A ton of my camp mates were there to celebrate this unofficial, temporary union. Her mad lib style wedding vows were crowd approved. I received messages from folks after the burn that they stopped by my wedding, but didn’t get the chance to catch me after. 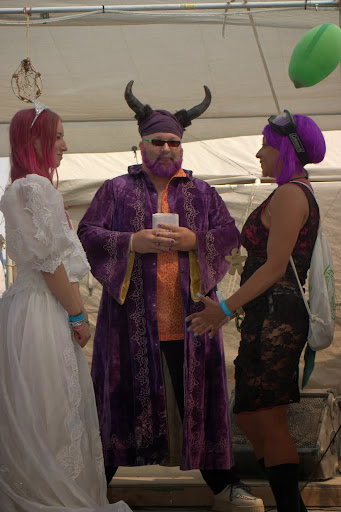 We spent a little time wandering streets and chatting. She went with me for my post 50K massage. On my birthday there was a balloon and a flask labeled, “Birthday Bourbon. -Your Wife,” waiting for me at my camp bar on my birthday. I definitely found a winner! My camp loved her and if she’s back for 2014 she’s definitely found a home with us.

Would I do it again? I’m not sure. It takes a lot to coordinate something like this on playa, especially since everyone operates on ‘Playa Time.’ Overall the experience was a win. I wish I had spent a lil less time sleeping and a lil more time hanging out and exploring with her, but it was still all smiles in my book. So the platonic marriage to a perfect stranger turned into meeting a superb being that I definitely need to schedule a date with.