In the early hours of October 28th Jersey City police walked into what was described as a ‘scene from a Halloween bloodbath movie.’ Hours before that Luis Rivera, 39, had an encounter with his roommate, Joseph DeLeo Jr., 28, that left him feeling uneasy. After Rivera returned to his room he was confronted by DeLeo who was wielding an 8-inch serrated knife.

Rivera says that he was pleading for his life, saying, “You’re going to kill me.” to which DeLeo responded, “You’re already dead you f-ggot.” When his third roommate walked out of his room he rushed to the aid of Rivera where he was subsequently attacked by DeLeo. Rivera stated that he pretended to be dead in an effort to save his life.

Rivera noted that DeLeo did admit to being homophobic which puzzled Rivera, who is openly gay.

DeLeo’s initial charge of aggravated assault was upgraded to attempted murder in addition to a count of aggravated assault with a deadly weapon, numerous weapons counts and one drug count. His $35,000 cash or bond was increased to $500,000 by Hudson County Superior Court Judge Francis B. Schultz. This still seems like a drop in a bucket when compared to the injures sustained by Rivera. He was stabbed 28 times which resulted in lose of a kidney, spleen, a collapsed lung that left him on a ventilator for three days, minimal use of one leg and no use in the other due to severe nerve damage. Rivera will need to partake in intensive physical therapy in an effort to regain use of his legs.

Even after all of this he is now facing attacks from supporters of the alleged attacked, DeLeo. One such post, although not addressed to any specific person said, “…I KNOW WHERE YOU LIVE AND HAVE YOUR NAME [sic]…” It appears that this comment made reference to undesired phone calls after the poster publicly advertised their own phone number.

More anti-gay sentiments have been directed at Rivera. One of the comments, in the image below, was made by the mother of the alleged attacker. Please note that the ‘Like’ to the third comment was done by Ms. Loughner.

Statements like this are the last thing you would expect towards an innocent victim that was brutally attacked in his home. 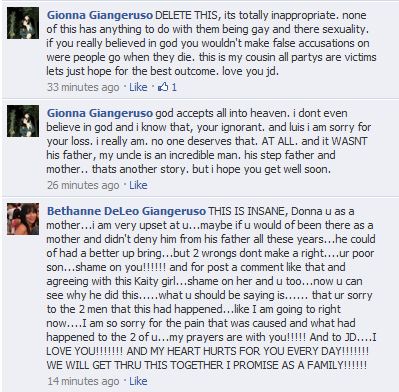 You can only hope that in this day that people would understand that spewing hateful messages is impressionable and you may be unknowingly leading someone to think that they have the right to attack someone not only with words, but physically with no repercussions for their actions.

Sending DeLeo to prison will not magically make Rivera walk again nor will it bring back any of his organs, but what we can hope a just verdict will do is minimize attacks on someone simply on the basis that they are not what you would prefer them to be. People should not be lead to believe that this is acceptable or tolerable.

Can we stop the senseless and hateful attacks on our fellow human beings?